This R&D project has established the fundamental technology that facilitates the expansion of global data communication infrastructures utilizing multicore fibers. Furthermore, we will promote R&D for practical applications, including mass production, operation, and maintenance of the infrastructure, with the objective of enabling commercialization of the technology by the mid-2020s.

【Background】
The global data transmission rate has increased significantly due to 5G mobile communications and enhanced data transmission between data centers. However, the annual demand for international communication traffic is expected to grow by 30–40% between 2020 and 2026 (Note 2). This trend might be accelerated as online activities continue to advance. Submarine optical cable infrastructure enables high-capacity international data transmission, and transmission capacity can be enhanced by employing multiple optical fibers in a cable. However, conventional optical cables can house only a limited number of optical fibers without changing the cable’s outer diameter. Therefore, in the absence of emerging technologies, increasing data transmission capacity has been a difficult challenge. 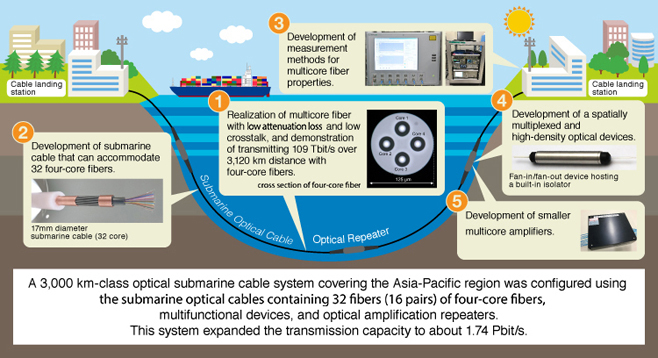 4) Development of high-density optical devices using a space-division multiplexing (SDM) technique.
We developed three multifunctional device types for the multicore fiber optical amplifiers. The three multifunctional devices for four-core fibers were a) a fan-in/fan-out device hosting an optical isolator, b) a TAP monitoring device with fan-out, and c) a TAP monitoring device having an O/E (optical to electrical) converter. Integration of these functions into a single device enabled ultra-low loss (typically 0.4dB) and compact optical devices (size reduction of 55%) for multicore fiber optical amplifiers.

5) Development and validation of multicore optical amplification and optical repeater systems.
Conventional multicore amplifiers containing a single-core optical amplifier and a fan-in/fan-out device are large and require gain blocks proportional to the number of cores (Note 3). As a result, increasing the capacity of submarine optical cables to meet the growing data transmission demand and accommodating large-sized amplifiers within the submarine cable repeaters has been challenging. Therefore, we developed a smaller multicore optical amplifier and have evaluated its basic optical amplification operation. Our amplifier employs a cladding pumping system, which amplifies multiple cores in one gain block, and by reconfiguring the gain block components we succeeded in lowering the amplifier’s volume by about half when compared to conventional devices.

Combining these results, we constructed a 3,000 km class submarine optical cable system that covers the Asian-Pacific region and contains 32 fibers (16 pairs) of four-core fibers, multifunction devices, and optical amplification repeaters. We demonstrated the feasibility that our system expanded data transmission capacity to about 1.7 Pbit/s, seven-fold higher than conventional systems. In the future, based on the foundational technology and infrastructure established by this R&D, we will pursue the development of technologies for the mass production of multicore fiber, verification of its long-term reliability, and development of operation and maintenance technologies, with the goal of putting them into practical use in the mid-2020s.