*This research and development has been conducted under the R&D contract “Wired-and-Wireless Converged Radio Access Network for Massive IoT Traffic (JPJ000254)” with the Ministry of Internal Affairs and Communications, Japan, for radio resource enhancement. 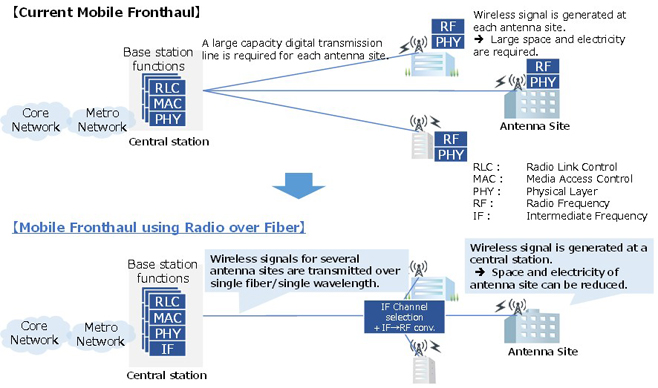 【Background】
In March 2020, 5G services made their entry into the Japanese market. For deployments of 5G and Beyond 5G/6G, especially those using mmWaves (Extremely High Frequency) that are easily blocked by obstacles, it is a concern that enclosed spaces such as indoor spaces may become radio dead spots. Consequently, it will require not only many antennas to be installed in various environments including indoor spaces, but also the capacity of mobile fronthaul between the central stations and the antennas will need to be increased. It is estimated that the transmission capacity of mobile fronthaul is more than five times the transmission capacity of the wireless signal data rate. This means a transmission capacity of over 100 Gbit/s is needed to deliver 5G wireless signals at a maximum rate of 20 Gbit/s.(*6) Although there are transmission standards for capacity of 400 Gbit/s or more, they are either for short-range usage such as data centers or for core networks. As for mobile fronthaul that should be installed in various areas with a range of up to 20 km, the highest speed of most adequate standards is only 50 Gbit/s.(*7) Furthermore, with the increase in the transmission speeds of future devices, their power consumption will be drastically increased. Considering the expansivity to beyond 5G/6G, there is strong demand for a new method for effectively transmitting wireless signals to antennas including those located in indoor spaces.

【Results】
As a solution to the above issues, KDDI Research, Yazaki Corporation, Waseda University, and NICT have developed a new radio over fiber technology called the IFoF scheme,(*8) which is capable of large capacity transmission of wireless signals with high efficiency by replicating the temporal wave forms of several wireless signals on the intensity of light. We have also developed new IM-DD(*9) optical transmitter/receiver devices for multimode fibers, which had previously been considered to be difficult to apply to mmWave radio over fiber because of its frequency response. By using the developed devices, the transmission of mmWave signals through multimode fibers that are suitable for indoor wiring was enabled. As a result, in a world first, we were able to successfully conclude an experiment for integrated transmission that enables mobile fronthaul 20 km transmission of wireless signals at 27 Gbit/s, which exceeds the maximum transmission rate of 5G, with consecutive 200 m relay transmission of mmWave signals through multimode fibers.

Since the mobile fronthaul system using radio over fiber technology that we developed is capable of large capacity transmission of wireless signals over one optical fiber with one wavelength, further capacity expansion can be expected by exploiting wavelength division and / or space division multiplexing. Therefore, the new mobile fronthaul is highly scalable in anticipation of the coming Beyond 5G/6G era. In addition, the IFoF scheme allows the use of transmission devices with lower frequency responses, which consequently contributes to power saving. It is also expected to contribute to SDGs and achieve agile deployment of systems in response to user demand because of the simple configuration of the system at antenna sites. Moreover, 5G and Beyond 5G/6G services will use extremely high frequencies exceeding those of mmWave, and it is a significant concern that enclosed spaces, such as those indoors, often results in dead spots. Therefore, relay transmission through multimode fiber, which is not susceptible to bending loss and is superior in terms of installability, is expected to contribute to the expansion of the coverage area of high-speed wireless communication services.

【Vison for the future】
In this demonstration, we conducted a radio over fiber experiment in the downstream direction, in which the radio signals were transmitted from a central station to an antenna site. We also plan to conduct a transmission experiment in the upstream direction, and continuously promote standardization of this technology in parallel with research and development to establish it as a practical scheme for IFoF mobile fronthaul technology for 5G and Beyond 5G/6G services.

(*1) Refers to a technology that transmits wireless signals via optical fiber by converting wireless signal waveforms into optical intensity information using an electric-to-optical converter. The receiver reproduces the wireless signals from received optical signals using the optical-to-electric converter.
(*2) Stations to accommodate wireless base stations and fixed-service subscriber (FTTH and businesses). The stations are connected to the backbone networks of telecom carriers.
(*3) Network section that connects DU (Distribute Unit) and RU (Radio Unit) for 5G wireless communication systems. It is equivalent to the access network between the closest station and antenna sites.
(*4) In general, it refers to wireless signals with frequencies between 30 GHz and 300 GHz. In Japan, the 28 GHz band (27.0–29.5 GHz) was allocated to 5G services, and treated as mmWave for the sake of convenience. It is suited to large capacity transmission, but it is highly rectilinear and prone to attenuation.
(*5) European Conference on Optical Communication. H. Y. Kao et al., ECOC 2020 Tu1G-7, “End-to-End Demonstration based on hybrid IFoF and Analogue RoF/RoMMF links for 5G Access/In-Building Network System”
(*6) 3GPP TR 38.801 Annex A
(*7) 50 Gbit/s PON (passive optical network) specification has been standardized in IEEE P802.3ca for bi-directional transmission in an access network. Standardization for point-to-point transmission up to 50 Gbit/s is now also discussed in IEEE P802.3cp and ITU-T G.9806.
(*8) IFoF=Intermediate Frequency over Fiber. It multiplexes several wireless signals in the intermediate-frequency (IF) domain, and transmits them simultaneously to antennas over a single optical fiber and single wavelength using optical analog modulation. As it processes signals in the relatively low-frequency domain, it is capable of large capacity transmission of wireless signals with a low-cost optical modulator and optical devices.
(*9) IM-DD = Intensity Modulation and Direct Detection.