The new technology is based on behavior analysis technology developed at KDDI Research, that estimates traveling means and routes from a series of position information. By utilizing the accumulated Big Data such as GPS, the technology can go beyond estimating population distribution within a given area. It provides highly detailed near real-time estimates and forecasting(*3) of numbers of people moving and remaining in place, as well as numbers of those moving along railways and roads.

The technology will make it possible to support public safety and security efforts by providing information on road conditions and evacuation centers immediately after disasters, or on traffic congestion in relevant areas during large-scale events. It can also help revitalize industries and regional locales through dynamic advertisement distribution for visitors in a given area. 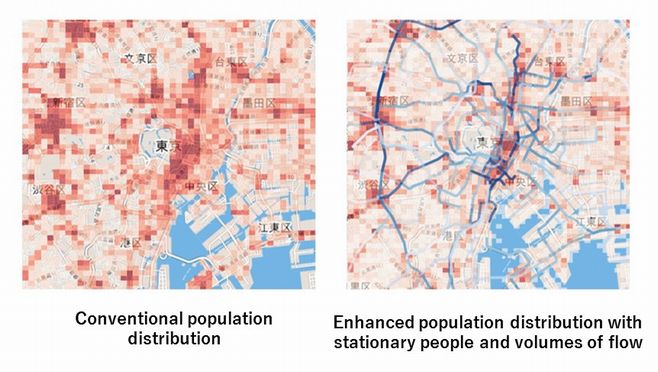 Conventional population distribution data (left) can now be enhanced with data on numbers of stationary people, routes of movement and volumes of flow (right).

The technology has been experimentally introduced to a part of “Taxi dispatch support system using artificial intelligence” announced on March 9. It is also being tested with a disaster response information support system for national and local governments(*4) announced on April 24. Through demonstration experiments across a variety of fields, KDDI plans to further perfect the system.

The technology will also be on display at the KDDI booth at the 16th Asia-Pacific Regional Intelligent Transport Systems Forum 2018, held in Fukuoka May 8-10, and at the Wireless Technology Park 2018 event at Tokyo Big Sight (Koto-ku, Tokyo) May 23-25.

1. Estimation and forecasting is performed every 15 minutes using demographic movements up to 30 minutes prior.
2. Big Data from position data consists of anonymized position and user attribute (i.e., sex and age range) data gathered under agreement with users of KDDI’s au smartphone brand.
3. Forecasts up to one week posterior can be made based on past and current trends.
4. See the news release dated April 24, 2018: KDDI, OYO and Toyota Agree to Cooperate on Gathering Data to Realize Disaster Prevention and Mitigation through the IoT ～Supporting Initiatives to Ensure Safety in the Daily Lives of Local Residents～