This open interoperability demonstration was conducted at the 10th International Conference on IP + Optical Network (iPOP2014) held in Musashino-city, Tokyo between May 22 and 23.

The volume of data transmitted within or outside data centers has dramatically increased with the spread of cloud business and use of big data, and it is expected to be about 8 times more in 2020 than that in 2012. In light of this, the network within and around data centers will require 100Gbit/s-class optical network devices and the mechanism to separate and manage network resources for efficiently converging various services having different communication qualities, bandwidths and such in a single carrier’s network. On the other hand, an increase in the operational cost would be an issue when the network comprised of multiple devices and networks achieves higher speed and becomes more complicated. Though the technology to enable integrated management of such a complicated network by use of open source interfaces such as SDN/OpenFlow*2 has attracted attention as a means of reducing the operational cost, integrated management of a large-scale network handling a large volume of data with a single device has been difficult to achieve. 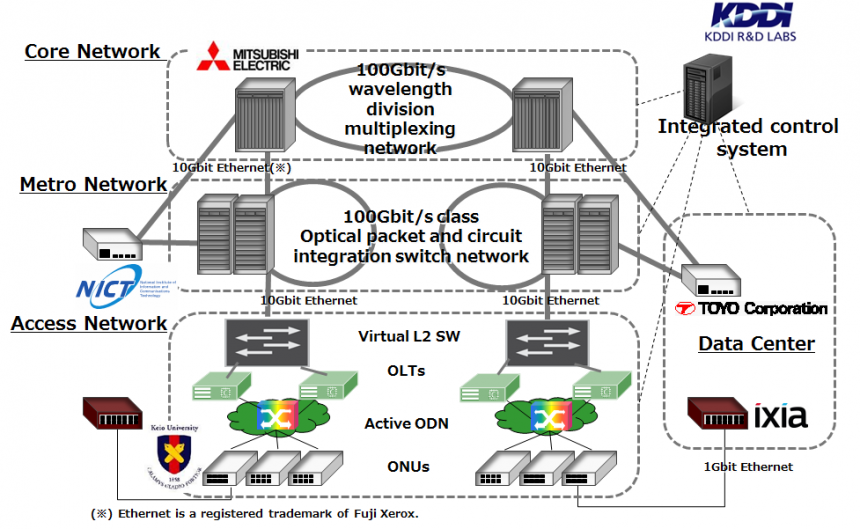 *2: OpenFlow is a registered trademark of Open Networking Foundation (ONF).

*4: Optical communication device that transports multiple-wavelength optical signals on an optical fiber - the device used for the test this time is capable of transporting 100Gbit/s of data per wavelength or a few terabits of data per optical fiber line. This work is partly supported by the R&D project on “Digital Coherent Optical Transceiver Technologies (FY. 2009)” and “High-speed Optical Edge Node Technologies (FY. 2010-2011)” by the Ministry of Internal Affairs and Communications (MIC) of Japan.

*5: Optical device that provides a communication path suitable for the purpose - an optical circuit is provided to end users who require high-definition image transmission or high quality communication for telemedicine or TV conference, and the optical packet switching is used for web access, e-mail forwarding and transfer of sensor data from a large number of devices.

*6: “Elastic” refers to the nature that allows users to flexibly change the signal bandwidth according to the requested bandwidth.

*7: The prototype supplied by Keio Univ. has been created based on the achievements obtained in the “Research and development on elastic optical aggregation technology,” a NICT-commissioned research project.

*9: The integrated control system (prototype) supplied by KDDI R&D Labs. has been created based on the achievements obtained in the “Scalable and efficient orchestration of Ethernet services using software-defined and flexible optical networks (STRAUSS),” a project commissioned by the MIC.

*10: This test will be conducted as part of the “Research and development project on Multi-Technology Transport Network Control Technology” promoted by the Interoperability Working Group (Chair: Naoaki Yamanaka, Professor for Faculty of Science and Technology, Keio Univ. ) of the Research Promotion Council of Keihanna Info-Communication Open Lab. This council has been working to contribute to the development of economy in the Kansai region by promoting the research and development in the ICT field through government-industry-academia collaboration. The Interoperability Working Group consisting of 9 organizations including KDDI R&D Labs., Mitsubishi Electric, NICT and Keio Univ. is one of the working groups of this council and has been making various proposals and performing verification on the interoperability of the next-generation optical network.