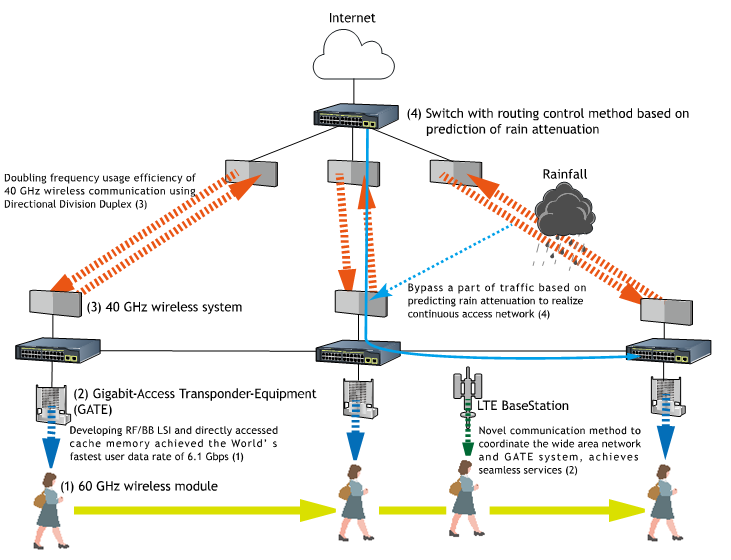 This development was conducted as a part of the “R&D for Expansion of Radio Wave Resources” program sponsored by the Japanese Ministry of Internal Affairs and Communications (MIC).

The ever-increasing levels of wireless-communication traffic in recent years have consequently led to increasing demand for more communication frequencies. Utilization of the millimeter wave (mmWave) band represents a key technology for the development of the heterogeneous networks (HetNets) [1] that will be used for 5th generation wireless cellular networks (5G). However, the application of mmWaves to mobile communications is generally considered to be difficult because of the short communication range associated with these waves as a result of the high attenuation of radio power in the mmWave band. For outdoor applications of mmWaves in particular, one major difficulty is how to avoid the effects of rain, which can dramatically reduce the transmitted radio-wave power. For mobile applications of mmWaves, the significance of this problem is that network operators must strive to avoid the effects of low data throughput in commercial mobile devices with maximum data rates of several hundred Mbps, which are much lower than the multi-Gbps data rate of a typical mmWave-based wireless device, while also increasing frequency usage efficiency using multilevel modulation in these wireless devices.

Sony and Tokyo Tech had previously developed experimental 60 GHz wireless complementary metal–oxide–semiconductor (CMOS) large-scale integrated circuits (LSIs) that operated with a data rate of 6.3 Gbps in the physical (PHY) layer in 2012 [2]. Now, they have developed a 60 GHz wireless module with high frequency usage efficiency, i.e., a data rate of 6.57 Gbps in the PHY layer that uses a 2.16 GHz bandwidth, based on the use of a 6 dBi slab-waveguide antenna (developed by Ando and Hirokawa Labs at Tokyo Tech), a 65 nm CMOS 60 GHz direct-conversion radio-frequency (RF) LSI and analog circuit with 40 nm CMOS process that includes a 2.3 G Sample/s 7-bit analog-to-digital converter (developed by Matsuzawa and Okada Labs at Tokyo Tech), and a 40 nm CMOS baseband (BB) LSI that incorporates a media-access control (MAC) layer and PHY layer that uses the above analog circuit and rate-compatible low-density parity-check (LDPC) codes*4 with code rates of 14/15 and 11/15 (developed by Sony). The design of this 60 GHz wireless module is based on the first draft of the IEEE802.15.3e*5 standard. They also developed a file transfer system with a high cache memory capacity that can be accessed directly from the wireless module with very high throughput. A 60 GHz wireless transfer system using the developed wireless module and file transfer system demonstrated the world’s fastest user data rate of 6.1 Gbps (which can transfer a 1 GB file in 1.3 s). The system enables users to receive large quantities of data in moments, without the low data throughput limitations of current commercial mobile devices.

Fig. 2. Photographs of a 60 GHz 6.1 Gbps wireless module (left) and of experimental setup for wireless transfer of files to a smartphone (right)

We have established an actual system that allows multiple wireless systems (hereafter called the GATE systems) installed adjacently each other to be operated independently without interference to demonstrate the high throughput and spatial isolation abilities of the 60 GHz wave-based wireless devices, e.g., a ticket gate at a train station.

A high-gain slot-array antenna (using approximately 1000 elements in experiments) that enabled spatial isolation was developed by Tokyo Tech (at Ando and Hirokawa Labs). In addition, the radio waves do not spread out and are confined for more than 10 m in a cylindrical service area.

In the scenario where users pass through the communication area within a short period of time, Sony has also implemented a MAC protocol on the RF-BB LSIs, enabling reduced link-setup times that allow users to start communications within 2 ms or less. JRC has integrated these technologies to form the GATE system.

In addition, using a future architecture technology called content centric networking (CCN)*6, KDDI Labs developed a method that operates together with the mmWave small zone (60 GHz band) and large zone long-term evolution (LTE) schemes in HetNets [3]. We could therefore realize high-speed file transfer in the mmWave band without the user being aware of switching of bands when passing through the GATE system. 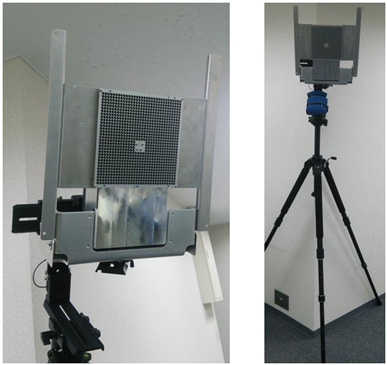 To locate the service area for the 60 GHz GATE system, which is a small portable access point, in arbitrary positions in the large zone as quickly as possible, easy installation-type radio link systems to accommodate GATEs are advantageous.

We performed a successful field demonstration of an example configuration that allowed a combined operation of the 60 GHz band GATE system and the 40 GHz band wireless access system with the maximum link length of 1 km or more with 1 Gbps-class speed.

The realization of DDD was only enabled by full use of high-isolation between transmitting and receiving antennas arranged in parallel and cancellation technology of transmitted signal leaked in the circuit.

Localized torrential rainfall can lead to the disconnection of mmWave links, because mmWaves are attenuated by water. A routing control method that is based on the prediction of rain attenuation avoids potential drops in the communication capacity of mmWave access networks caused by rainfall. When the area of rain is advancing towards the mmWave access network, the routing control method predicts the mmWave links that will be affected by the rainfall, and then selects alternative mmWave links to replace them. A proportion of the network traffic is then passed to the selected links proactively to reduce the drops of and ensure the capacity of the access network.

*1: The 40 GHz wave band is a licensed band that is available for high-density applications in the fixed service defined in ITU WRC-2000 (World Radio Communication Conference).

*2: The 60 GHz wave band is an unlicensed band that can be used worldwide. In Japan, a band between 57 and 66 GHz is available.

*3: Millimeter waves are usually understood to be waves with operating frequencies above 30 GHz and wavelengths that are measured in mm.

*4: Rate-compatible LDPC codes are LDPC codes that were designed to enable decoding using a single decoder.

*5: IEEE 802.15.3e is the next-generation 60 GHz wave-based wireless communication standard with a maximum PHY data rate of 100 Gbps and a maximum link-set-up time of less than 2 ms, and is currently being discussed.

*6: CCN is a future protocol that is currently being discussed by the Internet Research Task Force (IRTF) as a replacement for the Internet Protocol (IP).

*7: DDD is known as a full duplex scheme that has also been discussed in the Third Generation Partnership Project (3GPP).

[1] A HetNet is a network that is used to connect computers and other devices with different operating systems and/or protocols. An example of the application of millimeter wave technology to small-cell networks can be found in: http://search.ieice.org/bin/pdf_link.php?category=B&lang=E&year=2015&fname=e98-b_3_388&abst=

Center for Public Affairs and Communications